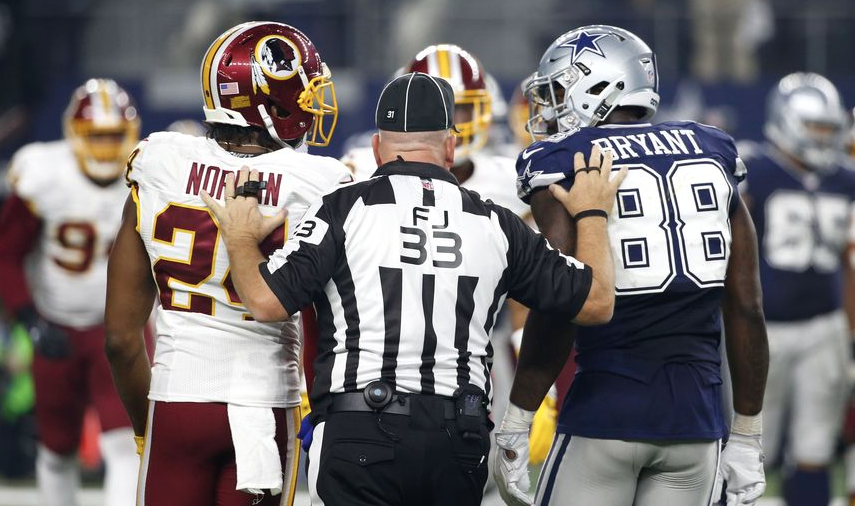 The finest non-weekend of NFL football has sadly come and gone. There’s no better American tradition than Thanksgiving Day football, annually featuring the Lions and the Cowboys. It seems every year the games are entertaining, and 2016 was no exception. Division rivals Minnesota and Washington gave their hosts everything they could handle and the viewing public, stuffed with turkey and full of gratitude, couldn’t have asked for more.

The turkey day results weren’t very surprising, as Pittsburgh handled Indianapolis in the evening game. Sunday held no shortage of shocking performances, though. The Chiefs took home a win, thanks to a friendly goal post and the 49ers nearly upset the red-hot Dolphins in Miami. Jameis Winston outdueled Russell Wilson and Jared Goff gave Hollywood some much-needed excitement for the future.

Cam Newton finally got a roughing the passer call: People who criticize Newton’s recent gripe –about football not being fun anymore because he doesn’t feel safe in the pocket—should consider this stat: on Sunday Cam got his first rough the passer flag since 2014! That’s pretty hard to believe, and gives a pretty big “thank you very much” to all his haters. Cam’s reputation for whining stands apart from the reality that he doesn’t get the same calls that many quarterbacks around the league do.

Kaepmagic: He came up about 2 yards short, but Colin Kaepernick led the 49ers on an epic comeback attempt. Miami relied on big plays and turnovers to hold on in an ugly win against San Francisco, now losers of 9 straight. The run game was all but non-existent for the Dolphins, which gave the 49ers and Kaepernick plenty of time and opportunities to nickel and dime their way down the field as the commentators discussed the future of the franchise. Miami will gladly take the win as they are still without their three best offensive linemen.

Kansas City’s pinball finish: For once, Denver was finally on the losing end of a down-to-the-wire finish. In a playoff atmosphere, two of the AFC’s elite slugged it out deep into overtime. The two teams are similar in nature: they’re built around strong defenses, led by elite pass rushers and a strong secondary, and game managing offenses. Nobody controls clock better than Alex Smith and Andy Reid, aka the kings of the not-sexy victory. Don’t confuse either of these teams with Dallas, whose ground and pound attack overwhelms even the league’s best defenses, but either one of them could be playing the Cowboys in February.

Bucs shutting down the Seahawks: Right when Seattle was gaining momentum as the team to beat in the NFL again, they promptly laid an egg in Tampa Bay. Two first quarter touchdowns from Jameis Winston to Mike Evans, including one criminally abusive catch over Richard Sherman, was all the Bucs needed. They didn’t score in the remaining 3 quarters, but Russell Wilson and the Seattle offense left their mojo on the west coast. Tampa’s defense held Seattle to only 3 offensive points and 245 yards.

Jeff Fisher feeding from the Goff Trough: After a heavy dose of slants and handoffs against the Dolphins last Sunday, Jared Goff finally got to play quarterback in the NFL this week. Nice and cozy inside a dome against a terrible defense he showed off the tools that led Los Angeles to sell the farm for him. Goff tossed 3 touchdowns and looked good doing it. The Rams are now 4-7 ostensibly out of the playoff picture. Let the kid take his lumps and let it rip, coach. Your fans will thank you later.

Brees shredding the Rams defense: Drew Brees has been worthy of MVP consideration this season, in spite of his team’s middling 5-6 record, so stuffing the stat sheet is not newsworthy. Doing so against Los Angeles defense, however, is hard to believe. The Rams are tied for 5th in scoring defense and they saved their worst performance of the season for a game when their offense actually gave them some support.

Things that shouldn’t have surprised anyone:

Josh Norman and Dez Bryant getting after it: They were both yapping afterwards, only because neither of them had a particularly memorable performance. Bryant finished with 72 yards and no touchdowns. Still, he nabbed a few impressive catches over Norman—who didn’t exactly shut him down. Neither player performed well enough to talk trash after the game, but since when did that every matter? Tis the season to be thankful for diva receivers and overrated cornerbacks.

Lions and Raiders finding a way: The Lions just won’t run out of magic. Similar to Oakland, this team knows how to win ugly. TBD on if it will translate to playoff success, or making the playoffs at all for that matter. After 11 games though, both teams look far better than anyone expected coming into the season. There is plenty to criticize for each of these teams, but they have the most important ingredient of any Super Bowl contender: a franchise quarterback. Matthew Stafford has taken his game to another level in 2016, finally putting his naysayers to rest. The same is true for Derek Carr, though he had fewer doubters to silence.

Hue Jackson tearing up: Living in Cleveland in the winter gets to even the strongest of men, but coaching one of the worst teams from one of the worst franchises in NFL history leaves no room for dry eyes. Jackson has proven he’s got the chops to be an excellent head coach in this league. Unfortunately, Sashi Brown and the Browns front office haven’t proven they can assemble talent. This season isn’t helping their resume. Facing the press after 11 consecutive losses isn’t something any head coach should have to endure.