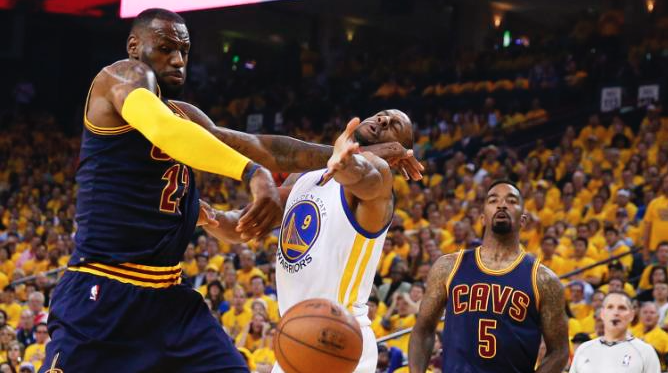 So far the NBA finals have lived up to the hype everyone expected, having watched Cleveland and Golden State dominate most of the regular season. After two thrilling games in the Oracle, the series is tied up. Both teams feel they could and should be up 2-0, but either could easily be down 0-2. For the sake of a longer and better Finals, neutral observers have to be pleased with the split. As the series shifts to Cleveland, I keep coming back to two remarkable storylines lying tacit in the background.

First of all, Golden State has to be one of the most fortunate title favorites in NBA playoff history, right? They avoided having to play Oklahoma City because of a heroic win by the Pelicans in the regular season finale. A win, it should be noted, that guaranteed they didn’t have to play the loser of the San Antonio-Los Angeles series, which ending up being the Spurs.  After cruising past the outmatched Pellys, they moved on to Memphis, who should’ve been their toughest hurdle in the West. If Mike Conley’s lingering ankle injury wasn’t enough to handicap the Grizzlies heading into the playoffs, CJ McCollum’s elbow and Tony Allen’s hamstring left them with no shot at an upset. Then, they dodged the Clippers thanks to an epic game six comeback by the Rockets and an historic collapse by the Clips. I can’t help but think the Clippers would’ve had a better chance at knocking off Golden State, but their meltdown adds doubt to that sentiment. As for Houston, they were without their starting point guard, and defensive stud, Patrick Beverly. And for all their shortcomings, the Rockets easily could’ve taken the first two games in Golden State, but things just seemed to bounce the Warrior’s way like they have all season. The Dubs, themselves, have made it through their record-breaking season largely unscathed with unmatched depth coming off the bench. If not for a questionable traveling call on Timofey Mozgof late in regulation of game one, the seemingly unbeatable Warriors could be down two games to the Cavs, a team without Kyrie Irving and Kevin Love. The second and third members of Cleveland’s big three can only sit and watch LeBron do his best to conquer the malevolent basketball gods and a juggernaut Warriors team with home court advantage.

Now I know the counter argument to all of this is simple: the Warriors have been the best team in the NBA all year and would have won every series regardless of any of their opponents misfortune. It’s hard to deny that, but it makes their success all the more frustrating. They deserve to be here, but no team needed luck less than them. Everyone wanted to see Golden State get tested by the Memphis’ size, San Antonio’s experience, or the Clippers athleticism. At the very least, we figured they’d end up playing the East’s juggernaut in the Cavs. Instead, they get a shell of the Cleveland team that caught fire and chemistry in the season’s second half. Not to say that without their luck the Warriors would have definitely made the Finals, but if they do win it all, even the slightest tarnish on this team’s season seems an injustice.

The other storyline that could emerge from these Finals, is the updated resume of LeBron James as an all time great. LeBron was heavily criticized for leaving a Cavs team that seemed to hit their ceiling in 2010. Before he hit his ceiling as a player, LeBron decided to leave so he could have a championship roster around him. If Cleveland had put such a roster around him sooner, he might not have ever left. All time greats like Jordan, Bird, Magic, and Kobe had other hall of famers helping them win their titles so they had no reason to change teams. We’ll never know if Jordan could’ve won titles with LeBron’s early Cleveland teams, but it’s admittedly hard to picture. We do know that LeBron was unable. When he came back to the Cavs this summer he joined a team that already had Kyrie and was about to acquire Kevin Love, two established superstars. Once the front office brought in Mozgof, Shumpert and J.R. Smith, the 2015 Cavaliers started to look like a championship roster. For LeBron to bring a championship to the city of Cleveland would satisfy the heart of every Cavs fan, but winning a title as the centerpiece of another big three would boost his basketball reputation only so much. Now, however, he’d be winning a title without another superstar on the roster. Where that would leave him, we may not find out, but, if he’s able to pull it off, I’ll be first in line to hear what the NBA historians have to say about it.

In the meantime we should all just kick back—or watch intently from the edge of our seats—because we should have an interesting finish to the season as the teams head to Cleveland.

Things you may have noticed subconsciously:

-Mike Miller looks like he was dead set on covering his entire body with Tattoos, then got halfway through and decided he never wanted to get another one.

-Who is more obnoxious with their mouthpiece, Steph Curry or Matthew Dellevedova?

-I’m pretty sure the Cavs scouting report on guarding Andre Iguodola reads something like this: “If he gets the ball on the perimeter, clear out.”

-Can anyone tell me the difference between 2015 Cavs Matthew Dellevedova and 2011 Mavs JJ Berea? Somewhere Andrew Bynum is having flashbacks to the last time he was seen on an NBA court.

-The play-by-play guys for ESPN are nearly flawless every game, so I always appreciate moments when they make a mistake. Just as Mike Breen states, “LeBron has played more minutes in a 5 year stretch than any other player in NBA history,” a graphic promptly appears showing Bird vs. LeBron in a 5 year stretch where bird played marginally more minutes having played 2 fewer games. I’m sure my man Mike was up all night thinking about it too.

-Late in the game Livingston got called for an offensive goaltending. In vintage Van Gundy form, Jeff shouts, “Outside the cylinder! (Replay shows ball resting on the rim) (Brief pause by JVG realizing he doesn’t know the rule) …at least some of it.” Still waiting to hear a good reason why Tirico and Hubie Brown got assigned to radio duty.

-I’m supposed to believe Draymond Green listens to Eminem after a game (or ever)? Unlikely.

-In one commercial break I finally caught the “Straight Outta Compton” trailer, which looks amazing, followed by a trailer for “Ant Man.” An interesting juxtaposition for sure. Ant Man looks like one of those movies that 10 years from now everyone will wonder how it ever got approved for production. Anyone who saw Role Models had to know Paul Rudd’s destiny was playing a superhero, right?

-Alfonso Ribeiro (Carlton from Fresh Prince—yes I had to look up his real name) was a beloved character on one of the most popular sitcoms of my lifetime. Twenty years later, you’ll find him pushing birthday cake milkshakes for Zaxbys in front of millions watching the NBA finals. But hey, I’m not hating, I’ve never been on a commercial.

-Every time I have to turn the volume down on my TV because the crowd noise is so loud, I think, “Man these Golden State fans really are nuts. Best home court in the NBA.” And then I remember back to when they booed their front office (after they traded Monta Ellis for Andrew Bogut) during Chris Mullin’s number retirement ceremony and immediately wish that everyone present that day was banned from ever coming to home games. The lesson here: Be smart when booing your own team.